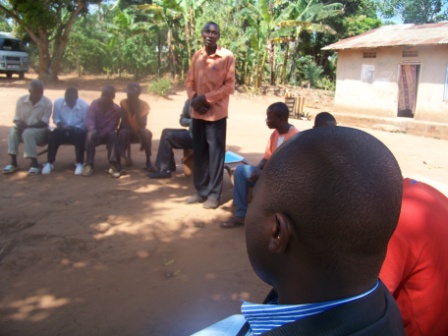 Today information about the global community is continuously becoming more available yet the space to access information supposedly closer to us and about issues that affect us more directly becomes narrower and narrower. But just to what extent is one entitled to know about activities that go on in their backyard that significantly impact their livelihood when they have no proprietary rights in said activities. Human lives and health are significantly affected by the nature of their environment and the activities that are carried out in their environments and the government has through the National Environment Management Authority (NEMA) set up measures to ensure that the environment is not affected by any activities including by requiring impact assessments before such activities are carried out.

Most importantly NEMA makes no effort whatsoever either on its own or in tandem with the local district leadership to educate the local communities about their entitlements in relation to the activities that could rip apart their community as such the communities have no basis upon which to hold whoever is implementing whatever activity in their community accountable. This typically results in an errant, unbridled and de facto unregulated implementation of an activity to the detriment of the environment and public health.

In 2012, NEMA approved an environmental impact assessment conducted by Chinese Communication Construction Company for a stone quarrying project to be carried out in Bamutakude and Kiryamuli villages in Mukono District. The quarrying was to supply aggregate and other materials to the construction of the Entebbe Expressway project. A Monitoring Committee was constituted among the local leadership of the villages to ‘monitor’ the stone quarrying but was never really engaged by the NEMA nor the local district leadership to equip it with information about the conditions set for the quarrier or the nature of the quarrying to be carried out in the community. What resulted was the constitution of a political unit that neither had the knowledge nor the information nor the power to keep the quarrier in check in case they violated any regulatory terms or any conditions that had been set for them prior to the approval of the quarrying project.

This subsequently reinforced the unbridled authority of the quarrier whose consequences were exposed in the damage the quarrying occasioned on the villages. The sole water well and stream that was used to access safe water by the two villages was contaminated by dust and mud and its natural flow interrupted by the quarrying activities. The dust from the stone quarrying which was constantly thick and present in the atmosphere and the rampant noise from the stone quarrying also made the area practically inhabitable for the people in the villages of Bamutakude and Kiryamuli. But these were only the visible effects of the blasting as the health of the people in the villages continuously deteriorated with increase in incidence of high blood pressure among other cardiovascular diseases and increase of poor eyesight brought on by the incessant dust and continuous blasting of rocks without warning. These grievances culminated in a popular protest by the community members of Bamutakude and Kiryamuli villages challenging the appalling conditions in the villages caused by the quarrying. CEHURD intervened on behalf of the community and after a few court appearances the tide is beginning to change in the community which is now more directly involved in how the quarrying is carried out in the community.

A community dialogue recently held by CEHURD unearthed some ugly truths about how making information readily available to the community could have averted most of the aggravating issues caused by the quarrying in the community.

Trouble arguably stemmed from the failure of NEMA or the local government to empower the monitoring committee or the local communities with information that they needed to know about the quarrying or the conditions that had been set for the quarrying to be carried out. There was no basis for the communities to assess compliance or to hold the quarrier accountable to.

The human rights language is highly unfamiliar territory for the average Ugandan and while communities typically involve themselves in processes in their areas the connection between information, health and the environment needs to be well articulated to the communities for them to be able to take interest in such quarrying from a perspective of their own welfare. Lack of such an articulation makes the quarrying just another ‘government activity in the middle of the community’ that the community has no place interfering with.

This opinion is reinforced by several obstacles to accessing information about the quarrying including language barrier with the quarrier whose employees only speak Chinese, lack of mechanisms through which to access such information may be realised and lack of knowledge of where to access the information they need.

Where an activity has potentially adverse effects on a community, it should be the obligation of the state to avail information about that activity to the people who could be adversely affected by that activity and hence need that information to protect themselves.

Limiting access to information as demonstrated in this case limits the ability of the community to monitor the quarrying activities that directly affect them and as such hold the quarriers accountable for their actions. In most instances this can have terribly adverse effects given the demonstrated inability of the government agencies to comprehensively monitor the activities of the quarrier. Information, as they say, is power and more effort needs to be deployed towards making information available and accessible because it not only fulfills human rights obligations but also places power over livelihoods in the hands of the people whose lives could be affected.