The Center for Health, Human Rights and Development (CEHURD) is currently implimenting a 12 month project funded by KIOS on intellectual property and human rights. The program seeks to build the capacity of journalists from the mainstream media with interest in reporting on the ongoing reforms in intellectual property laws in Uganda and elsewhere.

The IP and commercial law reform process is both an opportunity and challenge; an opportunity to promote technological progress while also protecting human rights, but also a challenge because of an unhealthy combination of lack of sufficient knowledge at the population level and a weak negotiating position vis-à-vis other countries and negotiating blocs.

The current laws and draft laws are not even taking advantage of the limited opportunities available through the TRIPS flexibilities, and a lot is at stake, including public health, food security and education. How well media influences the ongoing reform process will depend, among other things to their own capacity to understand, interpret and inform their audiences about all important developments in the IP and commercial law reform process. 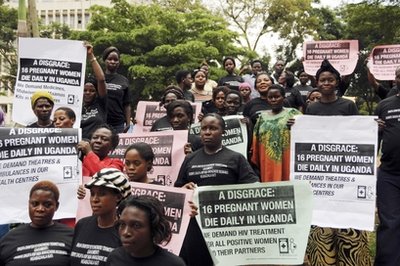 CEHURD was able to file the constitutional petition which seeks to secure among others a Declaration that non provision of essential maternal health commodities in a government health faculties leading to the death of these persons is an infringement on the rights to life and health. The court is set to hear the petition on 20th July 2011