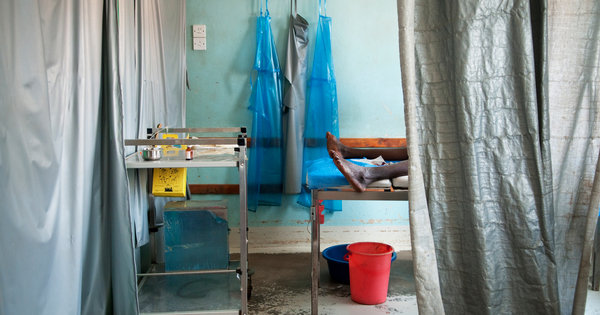 ARUA, Jennifer Anguko was slowly bleeding to death right in the maternity ward of a major public hospital. Only a lone midwife was on duty, the hospital later admitted, and no doctor examined her for 12 hours. An obstetrician who investigated the case said Ms. Anguko, the mother of three young children, had arrived in time to be saved.
Her husband, Valente Inziku, a teacher, frantically changed her blood-soaked bedclothes as her life seeped away. “I’m going to leave you,” she told him as he cradled her. He said she pleaded, “Look after our children.”
Half of the 340,000 deaths of women from pregnancy-related causes each year occur in Africa, almost all in anonymity. But Ms. Anguko was a popular elected official seeking treatment in a 400-bed hospital, and a lawsuit over her death may be the first legal test of an African government’s obligation to provide basic maternal care.
It also raises broader questions about the unintended impact of foreign aid on Africa’s struggling public health systems. As the United States and other donors have given African nations billions of dollars to fight AIDS and other infectious diseases, helping millions of people survive, most of the African governments have reduced their own share of domestic spending devoted to health, shifting to other priorities.
For every dollar of foreign aid given to the governments of developing nations for health, the governments decreased their own health spending by 43 cents to $1.14, the University of Washington’s Institute for Health Metrics and Evaluation found in a 2010 study. According to the institute’s updated estimates, Uganda put 57 cents less of its own money toward health for each foreign aid dollar it collected.
Rogers Enyaku, a finance expert in Uganda’s Health Ministry, disputed the assertion, saying the country’s own health spending had increased, “but not that substantially.” Still, the government set off a bitter domestic debate this spring when it confirmed that it had paid more than half a billion dollars for fighter jets and other military hardware — almost triple the amount of its own money dedicated to the entire public health system in the last fiscal year.
Poor people surged into Uganda’s public health system when the government abolished patient fees a decade ago. Increasingly, African countries are adopting similar policies, and experts say that many more people are getting care as a result. But Uganda’s experience illustrates the limits of that care when a system is poorly managed and lacks the resources to deliver decent services, experts say.
At regional hospitals like the one here in Arua, more than half the positions for doctors are vacant, part of a broader shortage that includes midwives and other health workers. A majority of clinics and hospitals reported regularly running out of essential medicines, while only a third of facilities delivering babies are equipped with basics like scissors, cord clamps and disinfectant, according to a 2010 Health Ministry report.
The hospital where Ms. Anguko died handles obstetric emergencies for a region of almost three million people, but it recently had no sutures in stock to sew up women after Caesarean sections. Dr. Emmanuel Odar, the hospital’s sole obstetrician, said that even in childbirth emergencies, families must buy missing supplies themselves, typically at nearby pharmacies. Patients without money must beg or borrow it, Dr. Odar said.
“We are overwhelmed with cases of people looking for free services, and they expect a lot despite supplies not there, human resources lacking and the beds not enough,” he said.
Dr. Olive Sentumbwe-Mugisa, a Ugandan obstetrician and adviser with the World Health Organization, participated in the Health Ministry’s investigations of the deaths of both Ms. Anguko and Sylvia Nalubowa, a second woman named in the lawsuit against the government, and concluded that both women arrived in time to be saved.
“We are in a state of emergency as far as maternal services are concerned,” Dr. Sentumbwe-Mugisa said. “We need to focus on the quality of care in our hospitals and address it in the shortest period of time. That will mean more resources. We cannot run away from that.”
In its lawsuit filed in March, the Center for Health, Human Rights and Development, a Ugandan nonprofit group, contended that the government violated the two women’s right to life by failing to provide them with basic maternal care.