Learning, re-learning and unlearning is what kept on my mind when I received an invite from the Community working group on Health (CWGH), Zimbabwe early this June for an exchange visit to one of their communities in Goromonzi. Zimbabwe is known for its advanced engagement of communities in health system governance. With the efforts and skills of CWGH, there is registered success in community participation. Anyone engaged in community work, would want to visit CWGH to learn from their experience. How treasured, I was to practically see what it means for communities to own processes- I should say, Uganda still has a long way to go and we have a lot to do to get closer to Zimbabwe, to see communities participate in health systems governance.

The team from Uganda, Malawi, South Africa and Zambia visited Mwanza Rural Health Center in Goromonzi. The community here is more than blessed; it’s more than happy for the works of CWGH. But did it do? CWGH worked with the Training and Research Support Center (TARSC) to initiate baby steps but progressively and strategically aimed at ensuring that health center committees (Uganda’s equivalent of Health Unit Management Committees (HUMCs) play their role in advancing the realization of the right to health in Zimbabwe. 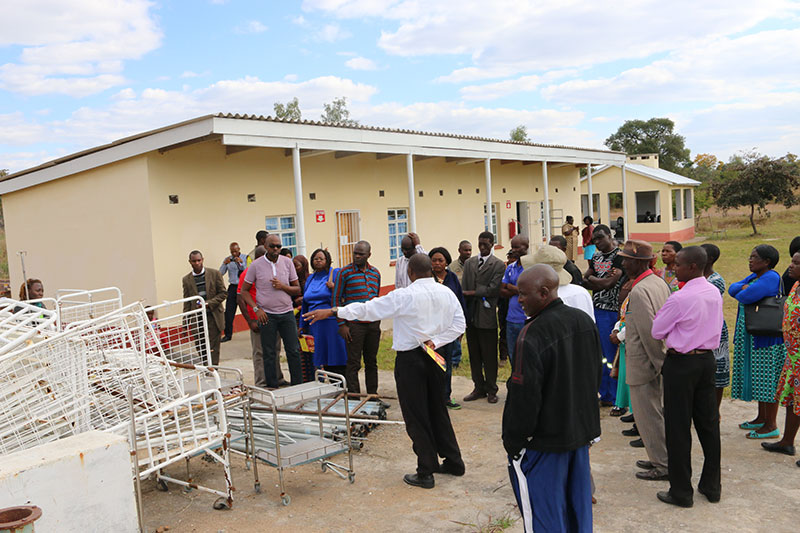 “In 1980, the HCCs were present but for lack of guidelines, funds, skills among others etc they died a natural death. CWGH vowed to reactivate them” Itai Rusike Executive Director CWGH noted. But together with TARSC we developed guidelines and followed the process through its adoption by the Ministry of Health through the Public health advisory board.” He added.

While countries like Uganda have such guidelines that explicitly state the roles and responsibilities of HUMCs, composition etc we still lack the experience Zimbabwe has. The functionality of HUMCs in Uganda is affected by so many challenges yet they would play a critical role in monitoring provision of services if the governance structure was supportive. There is fissure between operationalization of the HUMCS guidelines and the decentralized system of governance leading to non-functionality of this structure. This may be attributed to lack of a legislation to enforce their functionality- given that policies are not law in the country. Limited community knowledge on roles of HUMCs as strategy for their involvement, leaving a gap for communities to hold them accountable.

The availability of guidelines is sometimes not enough if its not followed by practical implementation of the same. Ideally this would necessitate tools development, hands on trainings, facilitation of such structures to be able to accomplish their roles. “Having guidelines wasn’t enough so a standard training manual for HCC was developed and adopted by the Ministry of Health through the Public Health Advisory Board. These have since become documents for recognition and used by everyone. HCC are now recognized by the Ministry, Local Governments and partners” Itai Added.

The Health Center Committees in Mwanza demonstrated what a community owned process means, the value, roles and responsibilities of communities were all laid out- this to me was a lesson to bring back home. The availability of clear guidelines, followed by trainings and facilitation of HCCs empowered them to realize and fulfil their roles and responsibilities. They managed to mobilize communities to build a waiting mothers ward at this health facility, why? In the past the facility and District as a whole registered many maternal deaths and this was majorly because of the long distance mothers had to trek to the nearest health facility, Makumbe District Hospital, which is 90km away from Mwanza. The solution?, with CWGH’s interventions and trainings of HCCs on their roles, there have been significant changes. Today mothers wait from this ward 3 weeks before delivery with food to mothers, electrify, water, name it provided by the communities. 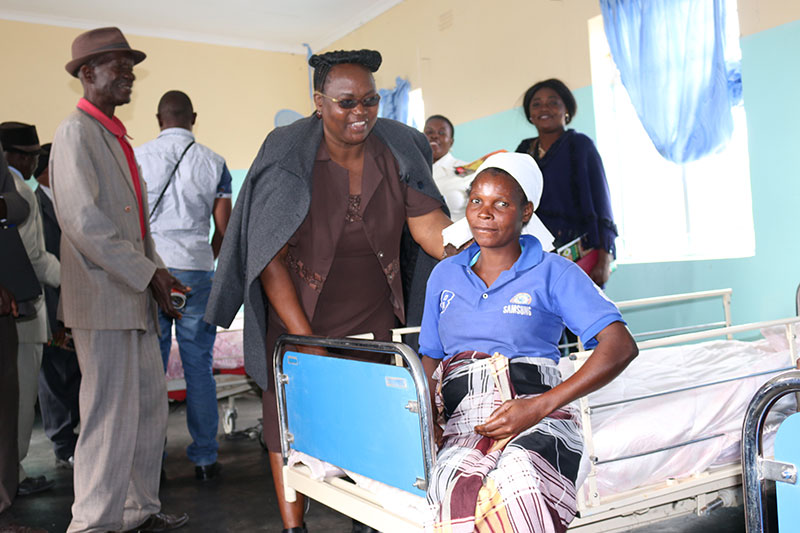 “When the community realized that we had the power to advocate for our own rights, the HCC, to which I am the Vice chairperson, opted to look out for resources to put up a waiting ward for mothers. From household meetings, village level, crying out to members of parliament, the army, the ministries and to CWGH, we managed to build a waiting home for mothers.” Mr. Munyongani Augustine. 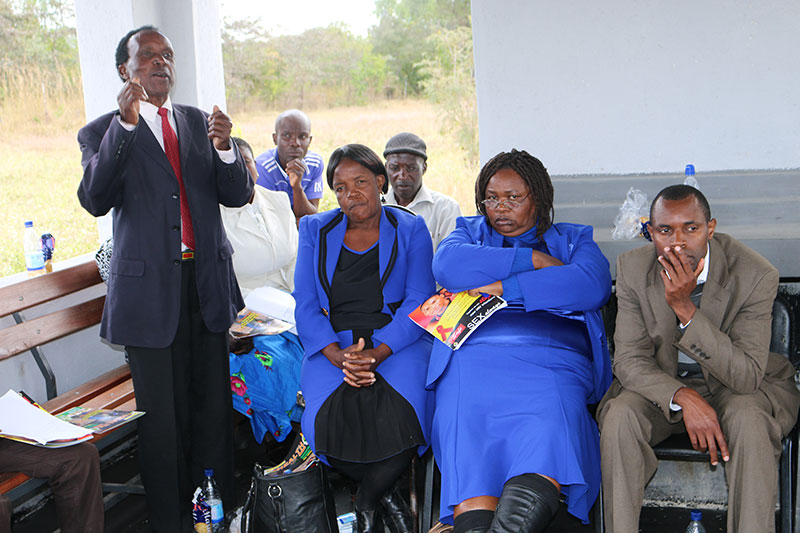 Listening to these stories and how committed communities are to own processes, makes me think that its possible for us to engage the communities further especially where the state has failed. Many of the cases for instance that Center for Health, Human Rights and Development has litigated have a bearing of long distances to health facilities. This however does not mean that the state sits back but rather works with communities to ensure universal access to health for all.

This exchange visit was wound up with an Annual meeting for the CWGH. This event displayed what it means for the people to participate in health systems. With a room full of thousands of people, Mr Itai Rusike the Executive Director of CWGH was not seen on the floor to speak- wow- but people that are faced with the challenges or those having the power to change for the betterment of the right to health and the communities!

While giving his key note address, Mr. Mulumba Moses the Executive Director of CEHURD (Uganda) left a strong message for us to critically think through and analyze from country perspectives. “Health is political and anything political is about power and resources. When engaging on power and resources, it means dialogue or descent. CSOs over dialogue and are taken for granted for the diplomatic approach they use. Sometimes we need to go beyond the dialogues and descent for change” Mr. Mulumba noted. 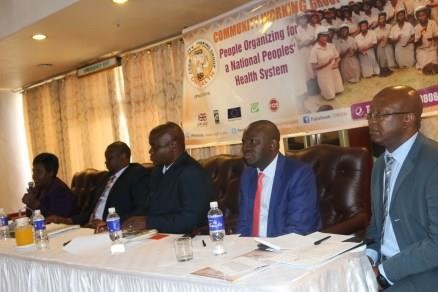 The voices of the speakers almost pointed to the same things. The challenges faced by the health system in Zimbabwe. At one point I wondered whether some of these were literature written about Uganda and were just being selected and placed onto Zimbabwe by the speakers- but it’s the truth. Some of these messages are:

No woman should die while giving birth, People are dying , children are dying while in hospital, on the way to hospital etc. Collective efforts are very key here- Executive, Legislator and Judiciary” Senator Anna Shiri (parliament of Zimbabwe)

There are areas of serious concern in our health systems. Some facilities lack basic medicines, equipment’s, understaffed while nursing students from colleges are not employed and as result people are dying of preventable diseases”. Mr Elasto Mugwadi- Chairperson Zimbabwe Human Rights Commission.

“We are neglecting to demand what is a right to us. Health is our right and therefore we don’t have to get a mercy of a politician on our health. It is time that citizens are mobilized to demand that our health be paid for just like they are paying for their own health (the VIPS)- Politicians shouldn’t use public resources to seek for health outside this country, they should get from their pensions. Doesn’t government have money to pay to our health sector? We have the money, it’s a matter of citizens beginning to demand that government prioritizes our health not their health” – Hon P. Sibanda Parliament portfolio committee on health , Zimbabwe.

Indeed we are different countries facing similar health challenges right from the community level to national level. The time is now for us to stand up and advocate for our rights. Remember “Anything for us, without our involvement is not for us” Together we can.

Kampala –Uganda – The Center for Health, Human Rights and Development (CEHURD) has petitioned the Uganda Human rights Commission to initiate an investigation of human rights violations that occur as result of disconnection of water supply to public health facilities by National Water and Sewerage Corporation (NWSC).

CEHURD in addition has appealed to the minister of water and Environment to invoke his powers as provided for under the Water Act to ISSUE an URGENT directive to prohibit water disconnection in public health institutions.

In the recent past, there have been frequent news reports of Mulago National referral Hospital being disconnected from water supply, Kiboga Hospital, Kawolo District hospital and most recently Bududa Hospital (See Newvision, Thursday 19th February, 2015 at Page 35 – Water Crisis Hits Bududa Hospital). The Lack of water in these health facilities has led to sanitation disease outbreaks including diarrhoea, dysentery to mention but a few.
“The right to water like other human rights creates a number of obligations on government and its agent’s m including obligations to protect respect and fulfill this human right.” Mr. Mulumba says. “The disconnection of water supply in public health institutions demonstrates the government’s failure to restrain third parties like NWSC from violating rights of its citizens of Uganda and thereby violating human rights such as rights to access water, right to health enshrined in Articles 8A, 45 and objectives XIV (b) and XX of the Constitution”, Moses Mulumba the Executive Director of CEHURD notes.

In November 2002, the Committee on Economic, Social and Cultural Rights adopted General Comment No. 15 on the right to water. In its Article I.1, the committee notes that the human right to water is indispensable for leading a life in human dignity and a prerequisite for the realization of other human rights. 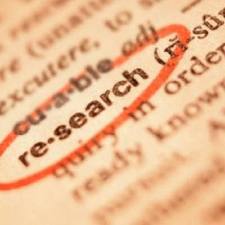 The Center for Health, Human Rights and Development (CEHURD) in Collaboration with the Leaning Network based at the School of Public Health and Family Medicine, University of Cape Town (UCT) and with support from IDRC invites students in Universities in Uganda to submit concept notes for their research to be conducted within the project “Health System Governance: Community Participation as a key strategy for realising the right to health”.

Background
Center for Health Human Rights and Development (CEHURD) in Collaboration with the Leaning Network based at the School of Public Health and Family Medicine, University of Cape Town (UCT) are undertaking an IDRC supported project which entails research on “Health System Governance: Community Participation as a key strategy for realising the Right to Health”. The overall aim of the project is to develop models for community participation in health that advance health equity and strengthen governance systems for health.

The main objective of the project is to explore the hypothesis that building civil society capacity to participate in health care and in services that provide the social determinants of health using a rights-based approach, in the context of interventions to enhance service responsiveness will help to address inequities in health and promote stronger and more sustainable governance systems for health that give voice to the poorest and most marginalized in developing countries.

Objectives of the call
This project aims to identify, in two sites, one in South Africa and one in Uganda, opportunities for best practice in utilizing community participation as a vehicle for realizing the health rights. As part of the project, we will be developing and testing training materials targeting primary health committees and structures that act as the voice for communities in relation to the health services. In addition, students will play a key role in documenting, describing and evaluating the processes and effectiveness of different strategies of the project.

Research Topics
The research topics should focus on the challenges regarding the sustainability of community participation strategies; effective participation strategies for the right to health ; enhanced responsiveness and better governance of the health system at local level up to the higher levels and how to build stronger conceptual and advocacy links between human rights approaches to health and health equity.

Eligibility
CEHURD and will collaborate with the Universities to select the students that will qualify to undertake research under the project. These students will typically be doing studies in the areas of Public Health, Human Rights, Social Sciences, Law and related areas. The students should be undertaking their research projects within academic year 2012/2013

Support
Students whose projects are approved under this collaboration will receive a student bursary to support their field costs and field work, as long as the project meets a research objective under the broader project aims.

For any inquiries concerning this c

all, please send an email to info@cehurd.org.