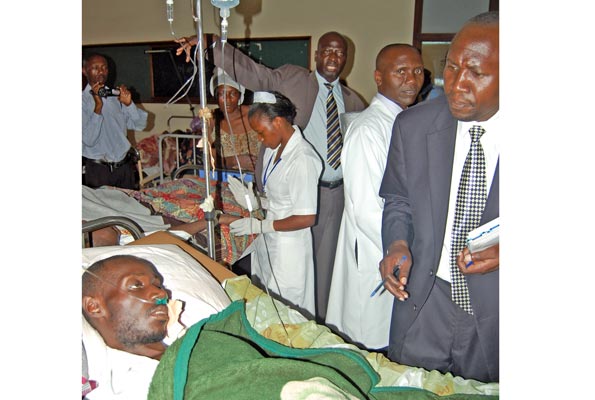 Posted on May 8, 2012Apr 25, 2015 Categories Featured 1 Comment on We shall block budget if health funding is not increased – MPs

Next financial year’s budget framework indicates that funding to the health sector might shrink, a move MPs threaten to oppose.

MPs on the Social Services committee have asked the government to increase funding to the health sector in next year’s expenditure estimates and warned that a failure to accept their recommendation could provoke them into blocking the ministry’s budget.

According to the 2012/13 National Budget framework paper, the health ministry is expected to absorb a reduction of Shs52.7 billion from the Shs814 billion which was allocated to it this financial year with the government proposing to spend Shs761.6 billion for the next financial year.

The Minister for Health, Ms Christine Ondoa, while appearing before the committee yesterday, brought the matter to the attention of the legislators where she attributed the reduction of the budget to a decrease in the donor-funded project component.
The reduction, however, means that the sector’s allocation will account for 8 per cent of the overall national budget which is way below the 15 per cent target set in the Abuja Declaration which Uganda ratified.

The legislators in a meeting chaired by Dr Sam Lyomoki (Workers MP), however, indicated that the budget cut would have a significant impact on the already sick health sector.

Ngora District Woman MP Jacqueline Amongin said the committee will not pass the budget if government does not increase the funding.

“It is surprising that the government is cutting money for the Ministry of Health and yet the same government committed itself and ratified the Abuja Declaration which talks of at least 15 per cent for the ministry,” Ms Amongin said.
“We still have so many challenges of health as women are still dying either because there is no transport or the health centre is very far. It’s unbelievable that in Ngora we have no doctor in the hospitals,” she added.

Ms Sylvia Namabidde, the Mityana Woman MP, said Uganda will not meet its Millennium Development Goal targets on health if government does not prioritise the health sector given the increasing population.

Poor services
While the government has endeavoured to set up health facilities across the country, the Uganda Local Government Councils Score Card 2009/2010 report by Advocates Coalition for Development and Environment, shows that improvements are only in infrastructure, especially in construction of health centres.

The report said problems such as shortage of drugs, understaffing, shortage of equipment, absenteeism of health workers, and weak accountability mechanisms still exist.

The minister had also noted that despite a government proposal to recruit about 1,020 health workers, there is no money for the exercise. But the MPs said unless the issue of human resource is handled, the public health sector will continue to fail to deliver services.

Ms Angelina Osege, the Soroti Woman MP, wondered why the government had not allocated money for the treatment of tuberculosis yet it is one of the leading killer diseases in the country.

Dr Asuman Lukwago, the acting permanent secretary in the ministry, however, said Shs214 billion would be required to effect the 100 per cent increment but they are constrained by resources.