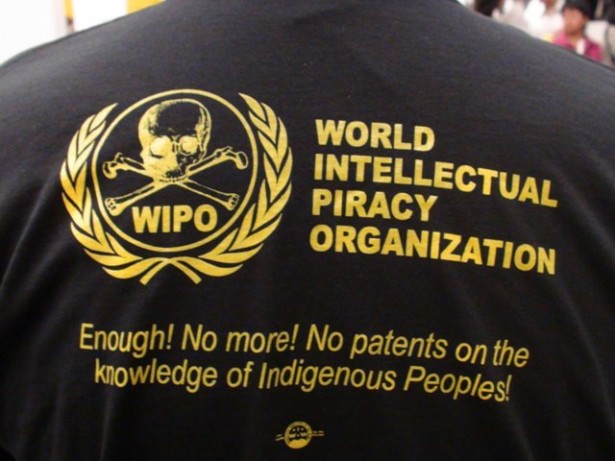 The t-shirts were meant to educate Indigenous Peoples about the threats that the World Intellectual Property Organization poses to Indigenous Peoples’ genetic resources, traditional knowledge and traditional cultural expressions. “It was very important to have a visual representation of what the work of WIPO actually is,” said Debra Harry (Paiute from Pyramid Lake in Nevada), who presented an intervention on behalf of more than a dozen indigenous organizations during WIPO’s presentation at the U.N. on May 10.

WIPO is a specialized body within the United Nations comprised of almost all of its nation-state members. It is “dedicated to the use of intellectual property (patents, copyright, trademarks, designs, etc.) as a means of stimulating innovation and creativity,” according to the WIPO website. WIPO services global registration systems for trademarks, industrial designs and appellations of origin, and a global filing system for patents, the site says. “Most industrialized nations have intellectual property protection systems that are centuries old. Many new and developing countries, however, are in the process of building up their patent, trademark and copyright legal frameworks and systems. With the increasing globalization of trade and rapid changes in technological innovation, WIPO plays a key role in helping these new systems to evolve through treaty negotiation, registration, enforcement, legal and technical assistance and training in various forms,” according to the website.

According to Harry and other indigenous delegates attending the UNPFII, WIPO is in the business of misappropriating indigenous knowledge, resources and aspects of traditional culture and expressions in order to commercialize and profit from them.

“There are many Indigenous Peoples’ in North America who have had a lot of their cultural traditional knowledge misappropriated. We’ve heard many stories of researchers who have come and done linguistics around Indigenous Peoples’ language and documented their oral histories and so on, and then have copyrighted that material and then the community no longer has access to that material. That’s an example of how intellectual property rights can be used to misappropriate Indigenous Peoples’ knowledge,” Harry said. Another example is the misappropriated and degradation of the Anishinaabeg’s traditional natural wild rice in Minnesota that benefits General Mills and General food.

Once the copyright protection or a patent expires, the material goes into the public domain, meaning it is available for free to anyone. “So if WIPO is successful in forcing indigenous knowledge systems into an intellectual property framework and certain aspects of our cultural heritage are usurped into that regime, it’s technically a one-way track out of our communities and out of our control and then put into the public domain. And the only reason you would do that is to commercialize it,” Harry said.

Indigenous Peoples and organizations withdrew from active participation in WIPO in February. The organization meets two or three times a year in Geneva. The member states have consistently ignored the indigenous organizations’ demand over the past three or four meeting for full and equal participation in the process or to respect their rights and interests in the process, Harry said. “All our text proposals have fallen off the negotiation table and our rights to participate continue to be diminished, for instance, the amount of money available to support Indigenous Peoples to participate has continued to shrink dramatically so when it shrinks and they’re only able to support five Indigenous People from around the world to attend, that’s hardly fair representation of the worlds’ [370 million] Indigenous Peoples,” Harry said.

In her presentation at the UNPFII, Harry asked the WIPO pointblank, “[u]nder what moral and legal authority do you presume to possess a right to impose an intellectual property rights regime upon Indigenous Peoples and Nations knowledge and resources?” The WIPO representative’s answer was not recorded.

The Global Indigenous Youth Caucus (GIYC) also made a presentation during the session. “WIPO is a contemporary monopolistic manifestation of piracy that magnifies the Doctrine of Discovery and domination. We take on the responsibilities of our ancestors’ legacy at this critical moment in history [and] call for the extinguishment of WIPO’s mandate,” the representative said.

The GIYC statement echoed the call from the organizations that endorsed Harry’s intervention that includes:

Recommending that Indigenous Peoples and nations set their own legal standards for the protection of genetic resources, traditional knowledge and cultural expressions.
“We have to continue to fight this whole process by any means,” Harry said. We have to call on states to let them know that Indigenous Peoples do not agree with what they’re doing and we need to see if we can get the mandate withdrawn from WIPO. These are matters that affect indigenous rights and WIPO is not an indigenous rights or human rights body. Their mandate is to promoted intellectual property rights; their income is derived from licenses. It’s purely an economic body.”