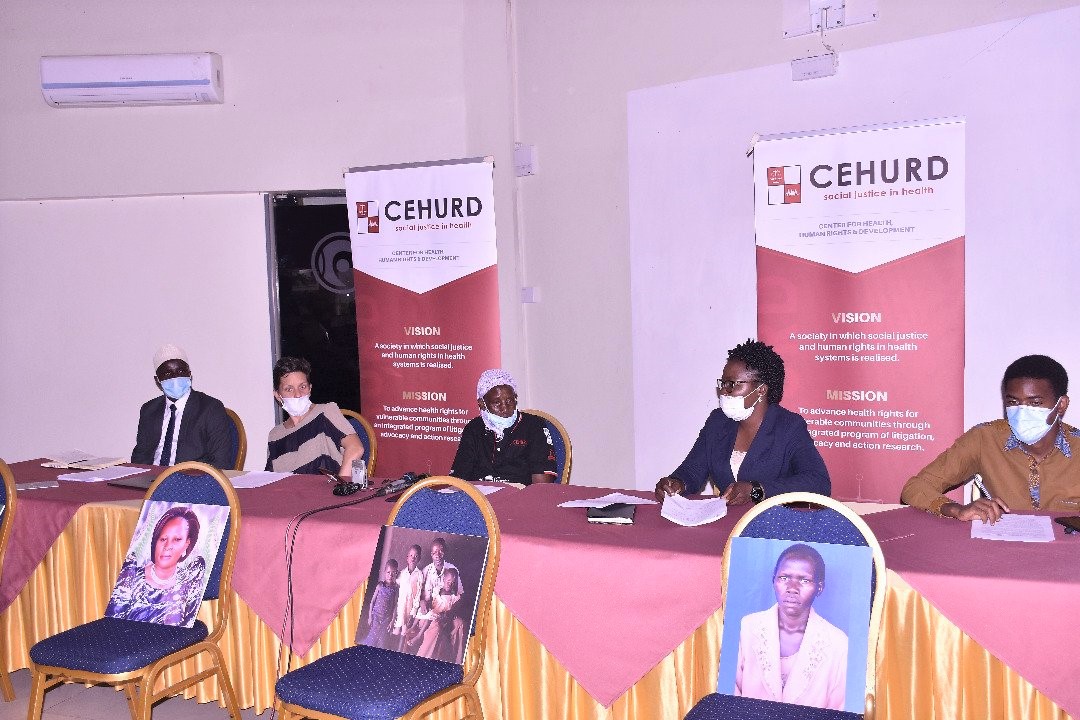 Kampala – Uganda. Today, Center for Health, Human Rights and Development (CEHURD), Prof. Ben Twinomugisha, Rhoda Kukiriza and Inziku Valente with joy welcome the long awaited judgement from the Constitutional Court of Uganda in the case of CEHURD, Prof. Ben Twinomugisha, Rhoda Kukiriza and Inziku Valente vs. Attorney General [Constitutional Petition No. 16 of 2011]. The Constitutional Court agreed with our submissions and all judges accepted all the grounds of the petition. Through this judgement, the right to maternal health care (and the right to health broadly) has been granted a place in Uganda’s Constitution. The judgment recognizes basic maternal health care services and emergency obstetric care.

This suit, filed in 2011, sought to challenge Government’s omission to adequately provide basic maternal health services and commodities in public health facilities as contravening the right to health, rights of women, right to life and freedom from cruel, inhuman and degrading treatment. The suit is premised on the wrongful deaths of the late Anguko Jennifer who died on 10th December 2010 in Arua Referral Hospital and the late Sylvia Nalubowa who died on 19th August 2010 in Mityana District Hospital. Both women died during child birth when they needed caesarean sections but failed to access the commodities and human resource required to obtain the same.

In his lead judgement Mr. Justice Barishaki Cheborion JCC found that “I have no doubt that the government has made attempts to address the omissions by putting in place policies, programs as reflected in the respondents submissions however for the right to maternal health to be realised, subsequent implementation of all the above mentioned policies and programs, their extension and evaluation has to be done which to a large extent has not been the case. Adverse effects on maternal health impact negatively on society’s wellbeing”

He also found that “The deaths of Ms Anguko Jennifer at Arua Regional Referral Hospital and Ms Sylvia Nalubowa at Mityana District Hospital were a result of non-availability of basic maternal health services and negligence of Health Workers. The actions caused utmost pain, degrading and cruel treatment of the deceased for the period they spent in the said hospitals fighting for their lives with no hope of survival until they died. This also caused untold suffering and loss to their families”

He also found that “Women suffer a lot due to shortages or short comings in the delivery of maternal health care services caused by stock-outs of maternal health care packages, drugs, professional negligence. Limited budgetary provisions to the health sector all of which deprive them of opportunity to safely deliver babies. Preventable deaths of pregnant women at Government hospitals deprive Women of the right to enjoy and realize their sexual reproductive rights”

We appreciate the judiciary for protecting, promoting and fulfilling the rights of women especially concerning their maternal function, indeed the power of the judicial pen has come to light in this case. Thank You

For more information contact: info@cehurd.org and copy in wasswa@cehurd.org or call 0788-882809.

We are pleased to announce that the problem for the 7th Annual CEHURD moot court competition 2020 is out! Good luck to the participants.

The Center for Health, Human Rights and Development (CEHURD) convenes the Annual National Inter-University Constitutional Law Moot Court Competitions. Since 2014, the moot court competition has seen more than ten (10) law schools in Uganda participate. The moot court competition is geared towards inculcating a better understanding of the Justiciability of the Right to Health and other human rights guaranteed by the Constitution of the Republic of Uganda, 1995 and recognized in several international instruments.
It also aims at aiding law students to improve their public speaking skills and give them an experience of the litigation process in Uganda. The CEHURD moot has built a cohort of young lawyers who appreciate the right to health and its Justiciability within the confines of Uganda’s legal system. 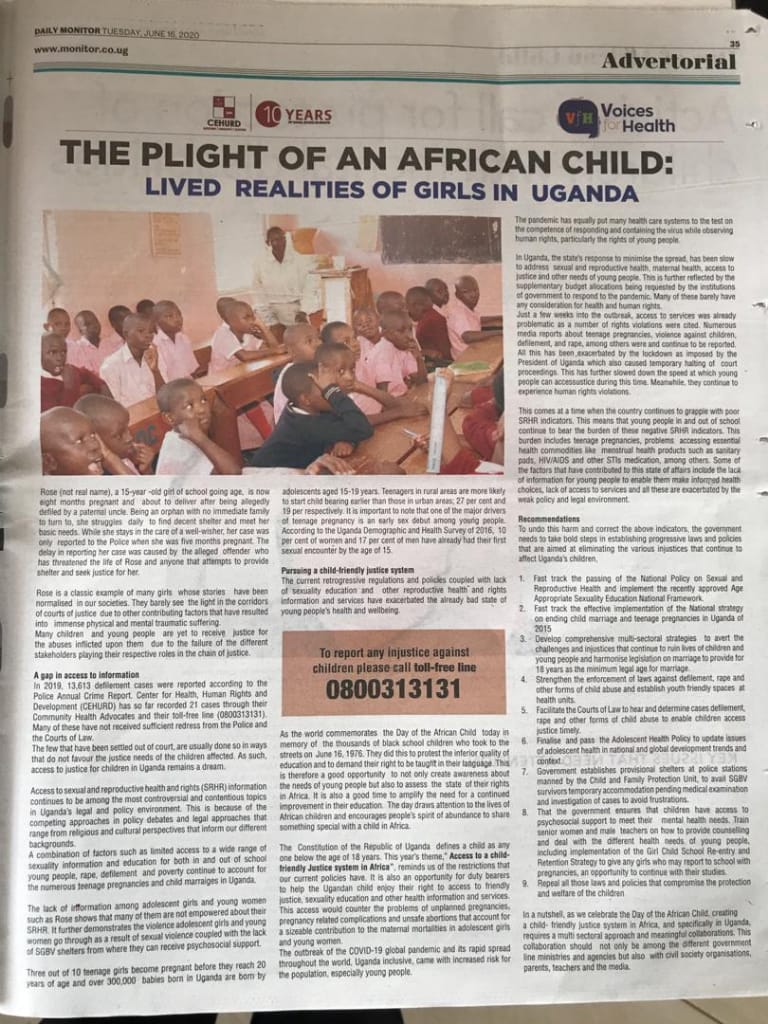 Posted on Aug 6, 2020Sep 11, 2020 Categories News 1 Comment on The Plight Of An African Child: Lived Realities Of Girls In Uganda

Rose (not real name), a 15-year -old girl of school going age, is now eight
months pregnant and about to deliver after being allegedly defiled by a
paternal uncle. Being an orphan with no immediate family to turn to, she
struggles daily to find decent shelter and meet her basic needs. While she
stays in the care of a well-wisher, her case was only reported to the Police
when she was five months pregnant. The delay in reporting her case was
caused by the alleged offender who has threatened the life of Rose and
anyone that attempts to provide shelter and seek justice for her.

Rose is a classic example of many girls whose stories have been
normalised in our societies. They barely see the light in the corridors of
courts of justice due to other contributing factors that have resulted into
immense physical and mental traumatic suffering.
Many children and young people are yet to receive justice for the abuses
inflicted upon them due to the failure of the different stakeholders playing
their respective roles in the chain of justice.

A gap in access to information
In 2019, 13,613 defilement cases were reported according to the Police
Annual Crime Report. Center for Health, Human Rights and Development
(CEHURD) has so far recorded 21 cases through their Community Health
Advocates and their toll-free line (0800313131). Many of these have not
received sufficient redress from the Police and the Courts of Law. The few
that have been settled out of court, are usually done so in ways that do not
favour the justice needs of the children affected. As such, access to justice
for children in Uganda remains a dream.

Access to sexual and reproductive health and rights (SRHR) information
continues to be among the most controversial and contentious topics in
Uganda’s legal and policy environment. This is because of the competing
approaches in policy debates and legal approaches that range from religious and cultural perspectives that inform our different backgrounds. A combination of factors such as limited access to a wide range of sexuality
information and education for both in and out of school young people, rape,
defilement and poverty continue to account for the numerous teenage pregnancies and child marriages in Uganda.

Three out of 10 teenage girls become pregnant before they reach 20 years
of age and over 300,000 babies born in Uganda are born by adolescents
aged 15-19 years. Teenagers in rural areas are more likely to start child
bearing earlier than those in urban areas; 27 per cent and 19 per respectively. It is important to note that one of the major drivers of teenage
pregnancy is an early sex debut among young people. According to the
Uganda Demographic and Health Survey of 2016, 10 per cent of women
and 17 per cent of men have already had their first sexual encounter by the
age of 15.

Pursuing a child-friendly justice system
The current retrogressive regulations and policies coupled with lack of
sexuality education and other reproductive health and rights information and services have exacerbated the already bad state of young people’s health and well being.

As the world commemorates the Day of the African Child today in memory
of the thousands of black school children who took to the streets on June
16, 1976. They did this to protest the inferior quality of education and to
demand their right to be taught in their language. This is therefore a good
opportunity to not only create awareness about the needs of young people
but also to assess the state of their rights in Africa. It is also a good time to
amplify the need for a continued improvement in their education. The day
draws attention to the lives of African children and encourages people’s spirit of abundance to share something special with a child in Africa.

The Constitution of the Republic of Uganda defines a child as any one
below the age of 18 years. This year’s theme, “Access to a child- friendly
Justice system in Africa”, reminds us of the restrictions that our current
policies have. It is also an opportunity for duty bearers to help the Ugandan
child enjoy their right to access to friendly justice, sexuality education and
other health information and services. This access would counter the
problems of unplanned pregnancies, pregnancy related complications and
unsafe abortions that account for a sizable contribution to the maternal
mortalities in adolescent girls and young women. The outbreak of the
COVID-19 global pandemic and its rapid spread throughout the world,
Uganda inclusive, came with increased risk for the population, especially
young people.
The pandemic has equally put many health care systems to the test on the
competence of responding and containing the virus while observing human
rights, particularly the rights of young people.
In Uganda, the state’s response to minimise the spread, has been slow to
address sexual and reproductive health, maternal health, access to justice
and other needs of young people. This is further reflected by the supplementary budget allocations being requested by the institutions of
government to respond to the pandemic. Many of these barely have any
consideration for health and human rights.
Just a few weeks into the outbreak, access to services was already
problematic as a number of rights violations were cited. Numerous media
reports about teenage pregnancies, violence against children, defilement,
and rape, among others were and continue to be reported. All this has been
exacerbated by the lock down as imposed by the President of Uganda which
also caused temporary halting of court proceedings. This has further slowed down the speed at which young people can access justice during this time.
Meanwhile, they continue to experience human rights violations.
This comes at a time when the country continues to grapple with poor SRHR
indicators. This means that young people in and out of school continue to
bear the burden of these negative SRHR indicators. This burden includes
teenage pregnancies, problems accessing essential health commodities like
menstrual health products such as sanitary pads, HIV/AIDS and other STIs
medication, among others. Some of the factors that have contributed to this
state of affairs include the lack of information for young people to enable
them make informed health choices, lack of access to services and all these
are exacerbated by the weak policy and legal environment.

Recommendations
To undo this harm and correct the above indicators, the government needs
to take bold steps in establishing progressive laws and policies that are
aimed at eliminating the various injustices that continue to affect Uganda’s
children;

In a nutshell, as we celebrate the Day of the African Child, creating a child-
friendly justice system in Africa, and specifically in Uganda, requires a multi sectoral approach and meaningful collaborations. This collaboration should not only be among the different government line ministries and agencies but also with civil society organisations, parents, teachers and the media.

A version of this article was originally published in the Daily Monitor.