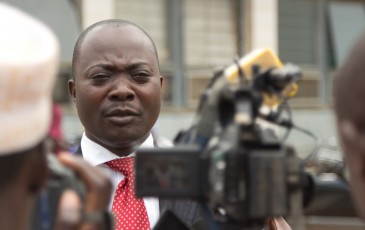 As I was buying souvenirs from Uganda’s craft village in Kampala, last weekend, I began chatting to several vendors about maternal health. I usually try to avoid harping on about work, and about the human rights related issues I’ve encountered; especially on a weekend, but for some reason: small talk, maybe? Interest, perhaps, in what a “Muzungu” (white person) would be doing in Uganda for more than a few, vacation-appropriate length weeks? – Many a probing question about my activities was sent my way.

Compliantly, I told them I was working on issues concerning Ugandan’s rights to health and of recent, on issues of maternal mortality in particular. That, however, was more than enough to get the conversation flowing; as each had some personal story to share concerning their wives and or other female relations’ encounters with issues of maternal health; issues that fuelled visible despair and upset among them as to the current, and often shocking, status quo.

Despite the global hype and dogged hope that has surrounded the Millennium Development Goals’ (MDGs) objectives, government efforts to achieve the fifth MDG in Uganda: to reduce by three quarters, between 1990 and 2015, the country’s maternal mortality ratio, to a rate of 131 per 10,000 live births, have been disappointing.

The rate of maternal mortality in Uganda, at an estimated 438 per 100,000 live births in 2011, remains far above what a number of other countries in the region have been able to achieve and, being socially stratified, is also largely preventable. Arguably, the main factor prohibiting the rate’s amelioration is resources: and further, underpinning this is a lack of political will to make maternal health spending a clear priority.

For instance, the government of Uganda does not currently allocate the resources that are required to deliver Uganda’s Minimum Health Care Package; a policy which has as an objective: the improvement of maternal and child health through, amongst others, the supply of basic maternal health commodities and increased health worker staffing.

In fact, since the millennial year the MDGs were announced, Uganda’s budgetary allocation towards the health sector has remained inadequate, with government health expenditure averaging at around 10.2% between 2009-13 according to the World Bank (which is below the 15% that is required and was pledged by Uganda in the African, Abuja declaration).

This stands in contrast to the 17.2% of government expenditure the World Bank says was devoted to Uganda’s military expenditure in 2010/11: which included the controversial purchasing of top-notch Russian military fighter jets that reportedly cost USD $740 million to buy, at such a time when Uganda was even being taken to court to account for the country’s high rate of maternal deaths (See discussion of Constitutional Petition No. 16 of 2011, below). Uganda, however, is not at war; but with 16 preventable maternal deaths a day, there are clear health battles at home to be reckoned with.

The cases of Jennifer Anguko and Sylvia Nalubowa expound this. Jennifer, a mother of three, needlessly bled to death in the maternity ward of one of Uganda’s major public hospitals. There was no available doctor to examine her for over 12 hours and the nurses repeatedly ignored Jennifer’s family’s pleas for help; even rebuking her husband for interrupting their idle conversations with his protests. By the time an obstetrician eventually arrived, it was tragically too late, and she had died.

Sylvia Nalubowa, a farmer and mother of 7 arrived at hospital needing emergency obstetric care to deliver her second child; she was unexpectedly having twins. Sylvia, however, arrived with none of essential items that women are expected to bring (including razor blades, gloves, cotton wool etc.,) for the birth of this second twin, given its unexpectedness, nor did she have any money to pay for the airtime the nurses allegedly demanded she pay to enable them call a doctor.

According to family members, Sylvia was consequently taken to the maternity ward and simply left there, unattended to for the 7 hours that she suffered: screaming in agonising pain, even “pledging her kibanja [squatter piece of land], hens and pigs if the nurses helped her out.” The nurses, however, were not interested in her pleas and instead of giving birth that day Sylvia also left hospital in a coffin, along with her unborn child.

These cases are not isolated events. They are symptomatic of the broader inequities that women face in Uganda and require systemic action in order to effectively address their causes. This is the rhetoric of human rights and indeed, providing women with access to maternal care is a core obligation “of comparable priority” in international human rights law, that is incumbent upon Uganda, as a party to the relevant treaties, to fulfil.

Holding the government to account for its progress (or lack of) in realizing this obligation is something that, according to recent technical guidance produced by the UN Human Rights Council on reducing preventable maternal mortalities, may include the typically unchartered avenue of judicial remedy.

Where government is failing to act, as the guardian of individuals’ fundamental rights and freedoms, the judiciary must act to protect the basic human rights of its country’s peoples. According to the guidance, this may even stretch to the judiciary’s reformation of “laws, polices and budgets that do not adequately protect sexual and reproductive health rights” in accordance with international law.

Incisively, in 2011 the Centre for Health, Human Rights and Development (CEHURD) filed a Constitutional Petition (Constitutional Petition No. 16 of 2011) that sought, among others, a declaration that the non-provision of the essential maternal health commodities that had led to the deaths of Jennifer and Sylvia, among others, infringed their fundamental rights to health and life.

The case – after a number of delays caused by the responding Attorney General – was, however, struck out following a preliminary objection that the case raised questions of a political nature, to which the court allegedly lacked jurisdiction to respond.

This week, however, the case will re-appear on appeal by CEHURD, before Uganda’s Supreme Court, to enable them determine whether the litigation should proceed. The occasion is a critical moment for maternal health in Uganda since, if CEHURD is allowed to proceed with the case, their petition may ultimately result in the budget increments that are required to secure the fundamental (and constitutionally protected) rights of women, to adequate maternal healthcare, that women and their families all over the country, as they have told me, so desperately desire.