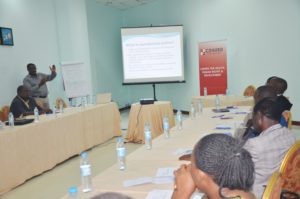 CEHURD within the Coalition to Stop Maternal Mortality Due to Unsafe Abortion (CSMMUA) held a meeting with Uganda Women’s Parliamentary Association (UWOPA) to clarify on the legal and policy framework on sexual and reproductive health.

The meeting was also used as an avenue to discuss evidence based approaches explored in addressing the sexual and reproductive health dilemma of unsafe abortion even where the law is restrictive.

In Uganda, unsafe abortion is one of the leading causes of maternal morbidity and mortality, contributing to approximately 26% of the estimated 6,000 maternal deaths every year and an estimated 40% of admissions for emergency obstetric care.

The meeting was motivated by a conviction that as policy makers, Members of Parliament (MPs) have a role to play in advancing Sexual and Reproductive Health issues in the development of laws around the subject and also interact with communities in their various constituencies.

The meeting paved a way for an open discussion on unsafe abortions that are a public health issue suggesting the different stakeholders’ roles, policy makers inclusive, in reducing abortion related deaths in Uganda.

Discussions at the meeting were centered on the law and politics of maternal health and sexual reproductive health in Uganda, the question of reproductive justice, reproductive oppression, and the status of 5 A annex ward at Mulago hospital.