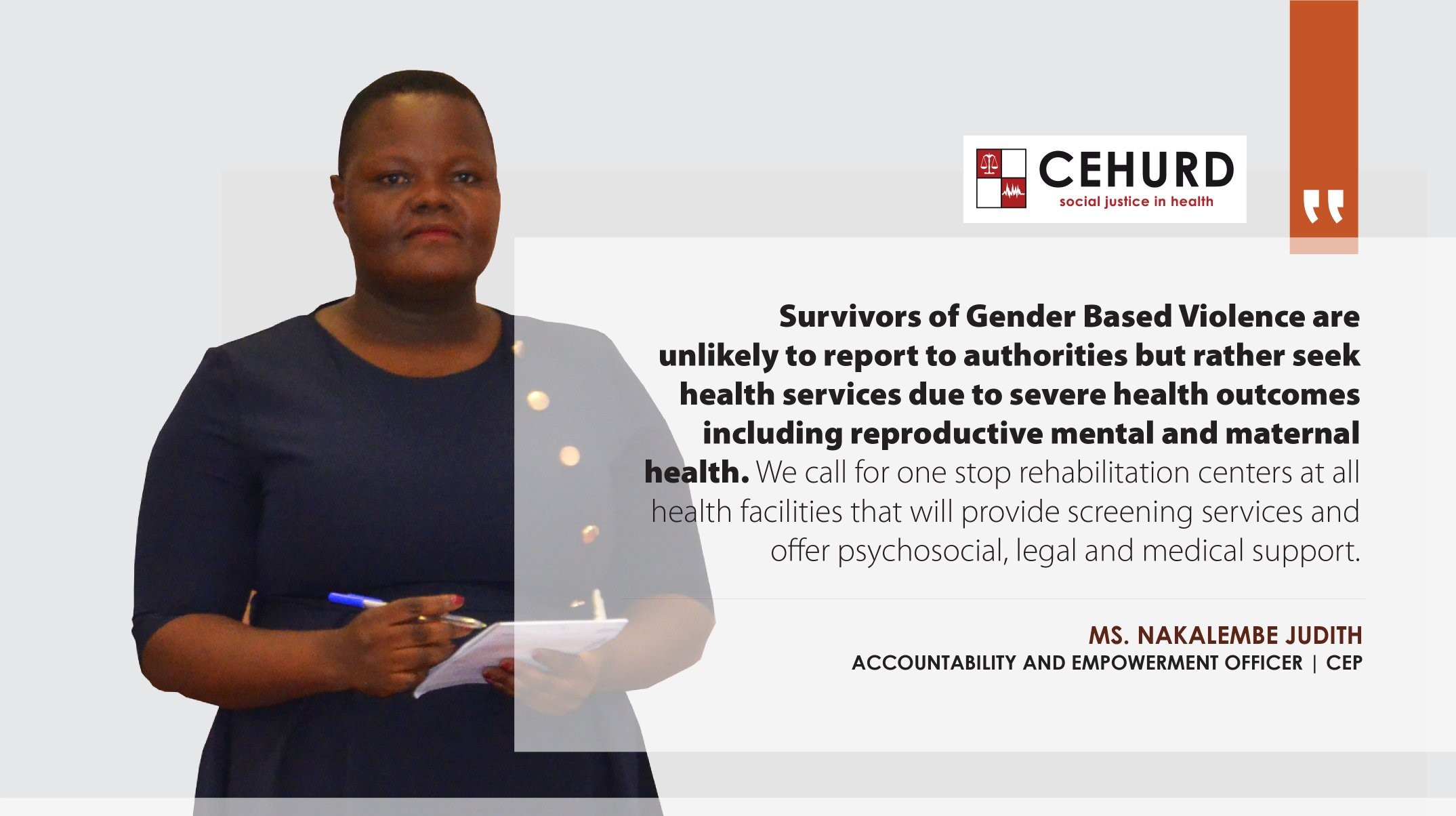 Posted on Mar 6, 2020Mar 26, 2020 Categories News 2 Comments on GENDER BASED VIOLENCE AND IT’S LINKAGE TO SEXUAL REPRODUCTIVE HEALTH OF WOMEN AND YOUNG GIRLS IN UGANDA

Gender-based violence is defined as ‘any harmful act that is perpetrated against a person’s will، and that is based on socially-ascribed (i.e. gender) differences between males and females. Gender based violence manifests in form of Sexual violence (rape، sexual assault، sexual harassment), Physical violence (hitting، slapping، beating), Emotional violence (psychological abuse), Economic violence (denial of resources) and Harmful traditional practices (forced marriages، female genital mutilation).[1]

Gender based violence is  one of the most severe forms of gender inequality and discrimination in Uganda and remains a critical Public health global health problem and one of the most pervasive human rights violations of modern time. It is an issue that affects women disproportionately, as it is directly connected with the unequal distribution of power between women and men thus, it has a profound effect on families, communities, and societies as a whole[2]. These Gender inequalities limit the ability of women and girls to fully participate in, and benefit from development programmes while formal and informal institutions, such as religion, family, marriage as well as social and cultural practices play a major role in perpetuating gender inequalities in Uganda.[3]

Gender based violence undermines the health, dignity, security and autonomy of its victims, yet it remains shrouded in a culture of silence. Violence often remains hidden, as survivors fear for their safety or are stigmatized. Victims of violence can suffer sexual and reproductive health consequences, including forced and unwanted pregnancies, unsafe abortions and miscarriages, traumatic fistula, sexually transmitted infections (STIs), preterm birth and stillbirth. [4] It is also associated with mental health outcomes, including posttraumatic stress disorder, anxiety and depression, and an increased risk of ideated or attempted suicide, or suffer other health consequences.

According to the UDHS for 2011 and 2016, the trends show that sexual violence is higher among the women. While Current husbands were found to be the leading perpetrators of both physical and sexual violence. Major improvements in GBV are attributed to increased awareness campaigns by both state and non-state actors in enforcement of the GBV policy. However, more needs to be done to further fight both sexual and physical violence (DFID, 2016).[8]

Uganda is a state party to nearly all international human rights conventions as well as relevant regional protocols with explicit provisions for gender equality and recognize Gender based violence as a form of discrimination. The 1995 constitution and broader normative and legal and policy frameworks reflect global standards, are strongly supportive of Gender Equality (GE) and, within recent policy documents, address gender-based violence (GBV) explicitly.

Uganda was active in the post 2015 development process; it was one of first countries to integrate the principles and goals of the Sustainable Development Goals (SDGs) into its National Development Plan (NDP) even before the global documents had been finalized. Both gender equality and GBV are featured in Uganda’s second NDP and evident in diverse sectoral plans. The government signed onto, endorsed and ratified principles which are enshrined in the UN convention on elimination of all forms of discrimination of women (CEDAW), The Beijing platform for action, Global Agenda 2030 Sustainable Development Goals (SDGs). The women’s access to SRHR is integrated in Uganda’s vision 2040, and it adopted the National GBV policy and Action plan 2016, and the national male engagement strategy in 2017.

The National Health Sector Plan reflects a rights-based approach and acknowledges international conventions. The National Action Plan on Elimination of Gender Based Violence in Uganda (2016-2020) frames the issue of GBV as an urgent development priority and factor to address in achieving Uganda’s development goals for 2020. Similarly, the interconnected work on ending child marriage and teenage pregnancy is framed by the new dialogue on leveraging for development the demographic dividend of a large, youthful population.[9]

GAPS IN INTERLINKING GBV AND SRHR

However, despite the strong normative framework on Gender inequality, including regulations, guidelines, protocols and even district level laws and ordinances, actual implementation of the policies has been challenging. The SDGs can only be achieved if Uganda as a state understands and accepts their ultimate responsibilities to fulfil obligations to international treaties and agreements and must performs them in good faith, state obligations entails compliance by government units across different sectors. Eliminating gender based violence requires the obligation of states on the principles to Respect rights of women, Protect rights of women, Promote rights of women, Fulfil rights of women and  Obligation of means and results.

There is a challenge in implementation of existing laws and policies, several laws remain pending while others require amendment and other development of comprehensive implementing policies and regulations. To more effectively protect the rights of women and girls, address discriminatory implementation of laws and ensure effective SGBV /SRHR integration.

Allocation of resources to implement laws policies and regulations, institutional and staff capacity and accountability mechanisms remain weak. The development of the social development sector plan (SDSP) provided a framework or all ministries, departments and agencies including health, justice, police among others to priorities integration of gender equality issues in their annual plans and budget reinforced by gender and equality certificate. However ministries departments and agencies and the decentralized structure [10]do not adequately priorities financial resources for GBV SRHR integration and there is a gap in the budget allocations for gender equality.

The national SRHR guidelines and service standards were revised but were recalled at ministerial level. While the national sexuality Education framework does not cater for girls outside of formal education and resources for its implementation have not yet been secured.

There is a Gap in the legal literacy capacity of ministries, departments and agencies and the sub national governments to engage in participatory –planning and gender – responsive budgeting and to implement GBV legislation and services. The lack of multi –sectorial mechanisms, with linkages to civil society, to oversee financing and accountability for GBV /SRHR programming hinders implementation.

There is a weak implementation of the right based approaches and insufficiencies in programming and implementation of gender responsive interventions for access to justice.  Health and police personnel at sub national level are still not aware of the changes to the PF3 form, and lack training in filling of the form  yet in many service points, the police forms 3A and 24  are not available

State actors working around GBV prevention and response remains under funded, with further work needed to build capacities of institutions to deliver GBV response and prevention programmes and integrate SRHR services. This lack of capacity continues to hamper efforts to implement legislation and policy. Funding is often allocated at the national level and does not trickle down to sub national levels. This has been evidenced by police officers being constrained with fuel to facilitate arrest or investigate GBV cases. Health workers running out of emergency contraceptives and cotton swabs to facilitate examination of SGBV survivors   yet still the long distance from communities to courts of law is often prohibitive to the optimal access to these services.

While coordination and referral mechanisms exist, they are often in operative and unfunded at sub national level and ineffective in ensuring continuum of support for survivors of Gender based violence. The district chain- linked committees (DCC) coordinate action within the JLOS sector, including cases of Gender based violence, but are often in active at the district level due to insufficient funding.

Stock out of SRHR commodities and Lack of access to SRHR services and essential medical services for survivors of Gender based violence. Most up country health facilities across the country lack necessary medical supplies and capacity to treat survivors of violence, particularly sexual violence. This includes shortage of rape kits, PEP, emergency contraception and pregnancy kits, and medication for treatment for STI.  Yet  girls and Women and girls usually lack access to information and experiences on the barriers and stigmas which exclude the from receiving essential services which leaves them and adolescent girls vulnerable to unwanted pregnancies, unsafe abortions and exposure to other sexually transmitted infections.

Structural weaknesses within the health sector and lack of human resources make it difficult for it to fulfil the requirement under the law. Few licensed medical practitioners are willing to appear in court as expert witnesses yet still they are a rarity in rural and urban Uganda and they have so far generally been unprepared and unforthcoming to fulfil their new additional duties as expert witnesses before the Courts. There is a lot of bureaucracy in terms of facilitating the health workers to court to testify and the burden is shifted to the poor survivors who cannot afford such charges leading to frustration of cases.

The country has few operational GBV shelter homes for rehabilitating victims of gender-based violence (GBV).and worse still those available are facing financial constraints and closing temporary.  In the shelters, survivors get legal aid, psychosocial services, temporary accommodation and referral to GBV survivors’ services. Government through the MGLSD should recommend for should CFPU reception centers to upgrade to shelters and allocate budget for the same to have them furnish and offers services to GBV survivors.

Prevention campaigns on GBV/SRHR conducted in Uganda often do not adequately consider the reality of the daily lives of Ugandan women and the difficulties they face in gaining control over their own sexual lives. The rampant spread of HIV/AIDS and the high prevalence of GBV can only be stemmed if the subordinate position of women is acknowledged and addressed. The study results indicate that adolescents and women, among other sub-groups are more vulnerable to GBV.  Inefficiencies within the supply chain system which limit effective delivery of both GBV and SRH commodities, with frequent stock outs of commodities experienced across health facilities, Inadequate training of health workers and Community Health Extension workers in integrated SRHR/ GBV services delivery, Socio-cultural barriers including harmful cultural practices and value systems which over look violence against women and girls, limited coordination and effort by health workers to offer services beyond what clients seek for at health facilities and inadequate referrals, Inadequate Human resource to support GBV/SRHR integration should be addressed to effectively integrate GBV and SRHR

The relation between Sexual reproductive health and GBV is mainly through intimate relations that are influenced by socio-cultural factors including gender power imbalances. It is evident that social factors such as the unfavorable economic position of women, and the inability to insist on condom use make Ugandan women unable to negotiate the timing of sex and the conditions under which it occurs. Thus, they are rendered powerless to protect themselves against HIV infection and other sexually transmitted infection, unwanted pregnancies.

By Judith Nakalembe – Programme officer and Lawyer at Center for Health, Human Rights and Development (CEHURD).