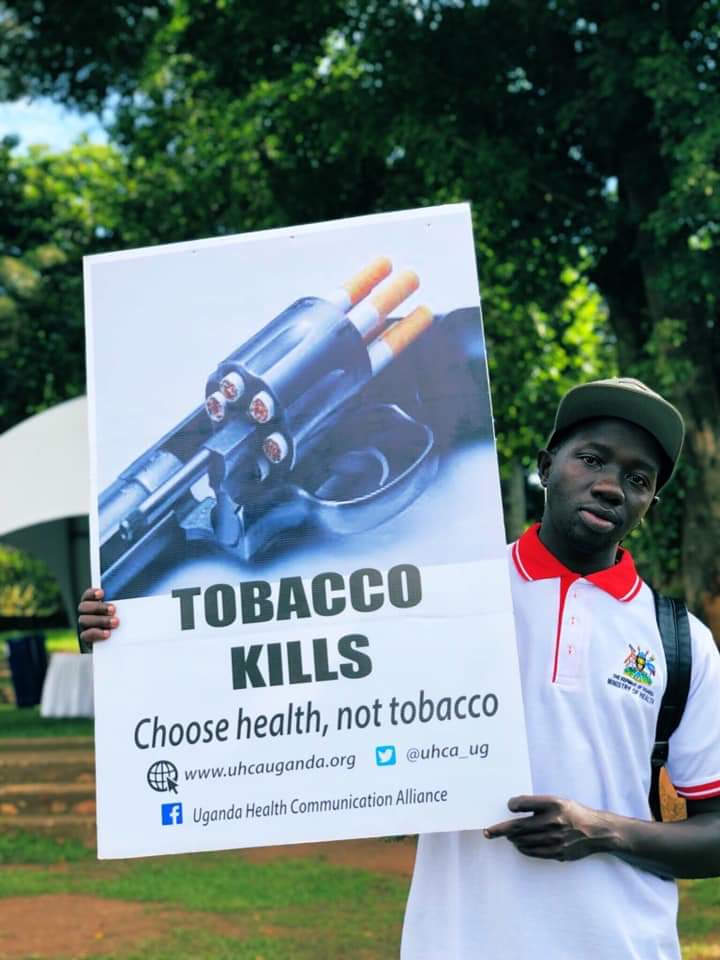 Creating public awareness on tobacco control and encouraging the public to adhere to, comply with and support implementation of the public health and tobacco control laws in place will help reduce the morbidity and mortality of cancers caused by tobacco smoke.

In Uganda today, Tobacco use has remained a significant public health challenge and a leading cause of many non-communicable diseases including heart diseases and lung cancer.

According to the World Health Organization, tobacco kills more than 7 million people each year. More than 6 million of those deaths are the result of direct tobacco use while around 890,000 are the result of non-smokers being exposed to second-hand smoke. Current scientific evidence has established that tobacco consumption and exposure to tobacco smoke causes disease, disability and death (The Global Adult Tobacco Survey: Country Report 2013). These are preventable deaths we all can commit to end if only we raise awareness on tobacco control and adhere to public health policies.

Parliament as the Legislative body in Uganda exercised its mandate under Article 79 (1) of the Constitution and enacted the Tobacco Control Act 2015 with the objective to among others control the demand, supply, production and consumption of tobacco and its related products.

There has however been a lot of misconceptions and misguidance about the Tobacco Control Act 2015 by the general public but also a deliberate move by the tobacco industry to sabotage the smooth implementation of the law. For example some of the arguments that have been forwarded by the Tobacco industry is that the Act is against the rights of farmers in Uganda and their legitimate right to trade in tobacco and its related products. As such, we need to educate ourselves and others on the law through supporting the Tobacco Control cause and complying with the public health/tobacco control laws in place.

It is also important that the public supports implementation of the law because it is all our responsibility to monitor tobacco use and protect people from tobacco smoke, offer help to those who want to quit smoking, warn people about the dangers of smoking tobacco in public places, and promote a smoke free environment.

The public enjoys a number of rights under the Constitution of Uganda and Tobacco Control Act including the Right to a clean and healthy environment as well as the right to a tobacco smoke free environment, the right to health among others. The law inter alia prohibits smoking in public places, workplaces, any means of public transport, or any outdoor space that is within 50 meters of any public place, workplace, public transport terminal, a place that provides services primarily to children, or a place of service or consumption of food/drink.

It is important to note that an individual’s right to smoke is not prohibited by law as thought by the general public and the tobacco industry, rather the law places a limitation on smoking in public places. This helps to ensure that in the enjoyment of one’s rights and freedoms, the fundamental or other human rights and freedoms of others are not infringed or violated upon by individuals smoking in public. (Article 43 of the Constitution).

The public should henceforth support the implementation of the law by ensuring that owners of public places   display notices on premises prohibiting smoking in such places, ordering people found smoking in public places to cease smoking immediately, requiring such person to leave/disembark the place, causing arrests of such person, or contacting a law enforcement agent/authority.

The Act also regulates the Tobacco Industry (manufacturers, wholesale distributors, importers of tobacco products, persons/entities working on their behalf to further their interests) by placing a comprehensive ban on all forms, methods, and means of tobacco advertising, promotion and sponsorship, restricts the sale and display of tobacco and tobacco products, bans the importation, manufacture, distribution, processing for sale, offering for sale, or bringing into the country electronic nicotine delivery system/cartridges with nicotine, water pipe tobacco delivery system, and smokeless or flavored tobacco products. The public should ensure that such is complied with.

Just like all other businesses that are regulated by Government, the control of tobacco smoking in public places and regulation of its advertisement and promotion is not a unique thing. The public should therefore disregard the arguments by the Tobacco industry that the Tobacco control law bans them from conducting in a lawful trade. The public should instead join and support the government in promoting public health.

It should therefore be noted that the Act does not ban the Tobacco Industry from practicing their trade as provided under Article 40(2) of the Constitution of the Republic of Uganda 1995 but puts in place a regulation on the conduct of their trade. The public health issue comes into context where the public needs to be protected from the harmful effects of certain trades.

As such, we should all join hands to make healthy lifestyle choices and avoid using tobacco and related products and educate ourselves and others to support the Tobacco Control cause through complying with the tobacco control laws.

By Esther Dhafa and Komakech Job