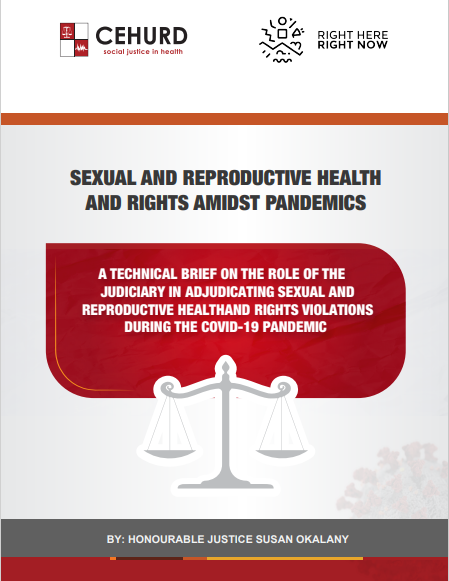 Inevitably, sexual and reproductive health rights were violated during the lockdown. According to a UNFPA document on teenage pregnancy in Uganda during and post Covid-19 lockdown, Eastern Uganda (Busoga) was
reported to have the highest reported cases with Luuka district alone reporting more than 600 cases. According to a preliminary 2020 Police report, 4,442 cases of defilement were reported between January and April 2020. The
Sauti reported 800 cases of sexual abuse between January and May 2020, including increased cases of teenage pregnancy.
Reports also indicate that girls suffered more sexual violence and exploitation when they were isolated, quarantined or moved to other areas to escape the virus. While data was scarce, reports from China, the United Kingdom, the United States, and other countries, suggest an increase in domestic violence cases since the COVID-19 outbreak. During humanitarian crises, sexual 12 A Technical Brief On the Role of the Judiciary in Adjudicating Sexual Reproductive Health and Rights Violations during the Covid-19 Pandemic violence increases, lack of family planning supplies and services leads to the spread of sexually transmitted infections (STIs) and unintended pregnancies.

Going into a lockdown meant that all aspects of ‘normal’ life had taken an unexpected turn, and legal and judicial practice in the country was no exception. For the purpose of this discussion, the term judiciary is used to
refer, in the collective, to the magisterial courts, High Court, Court of Appeal and the Supreme Court of Uganda and the attendant institutional set up of the judiciary as an arm of government of Uganda. Following the announcement of the nationwide directives, the Chief Justice of Uganda (at the time) published guidelines for mitigating and preventative measures that would be taken by the judiciary in response to the pandemic.

The Chief Justice(CJ) directed that,
“Courts will continue to handle certificates of urgency and taking
plea for serious cases and bail applications. Only the applicant
and his/her lawyer, or in the case of bail application, the sureties
will be allowed in Court,” “During this time, all Judicial Officers and
staff will continue being on duty. However, there will be no open
court appearances.
Judicial officers with pending judgments shall use this period to
complete them. Where possible Judgments and Rulings may be
issued to the Parties online or via E-mail.”