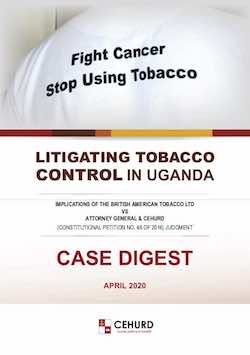 Uganda enacted the Tobacco Control Act (hereinafter called “the TCA”) in 2015 as part of fulfilment of Uganda’s obligations and commitment as a party to the World Health Organisation Framework Convention on Tobacco Control (WHO FCTC). The Act commenced on 18th May, 2016.

In 2016, the British American Tobacco Uganda Limited (BATU) filed Constitutional Petition No. 46 of 2016 under Article 137 of the Constitution of the Republic of Uganda, 1995 contending that sections of the Act violated certain provisions of the Constitution. CEHURD successfully applied to join the case and support the Attorney General drawing on its expertise in litigating health-related cases but also the likely implications of the judgement (had it come out negative) on public health issues in the country.

The Constitutional Court heard the case and delivered the judgement against BATU. The lead Judgment was delivered by Justice Kenneth Kakuru, with whom all the other Justices unanimously agreed. The court reaffirmed that its jurisdiction is limited to interpretation of the Constitution, as such, it could not entertain attempts by the Petitioner to move away from constitutional interpretation issues. The Court noted that the Petitioner’s rights alleged to have been violated are not absolute but are subject to the limitation set out under Article 43 of the Constitution.

As such, the Court found that while the Petitioner has a constitutional right to practice lawful trade and business, that right is restricted in as far as it prejudices the rights of others including children, non-smokers, pregnant women and those who may have quit smoking. The Court ruled that the legislative objectives which the TCA sought to achieve were sufficiently important to warrant the overriding of the Petitioner’s rights.

This case digest has therefore been developed to guide the readers on the practical implications of the Court’s decision. The brief will give some background knowledge and information on the core issues that arose at trial, it will analyse the jurisprudential underpinnings that informed the Court’s decision and also serve as serve as a future reference point on matters concerning tobacco regulation and litigation. We are hopeful that the digest will be a reference tool for anti-tobacco activism and advocacy in Uganda.