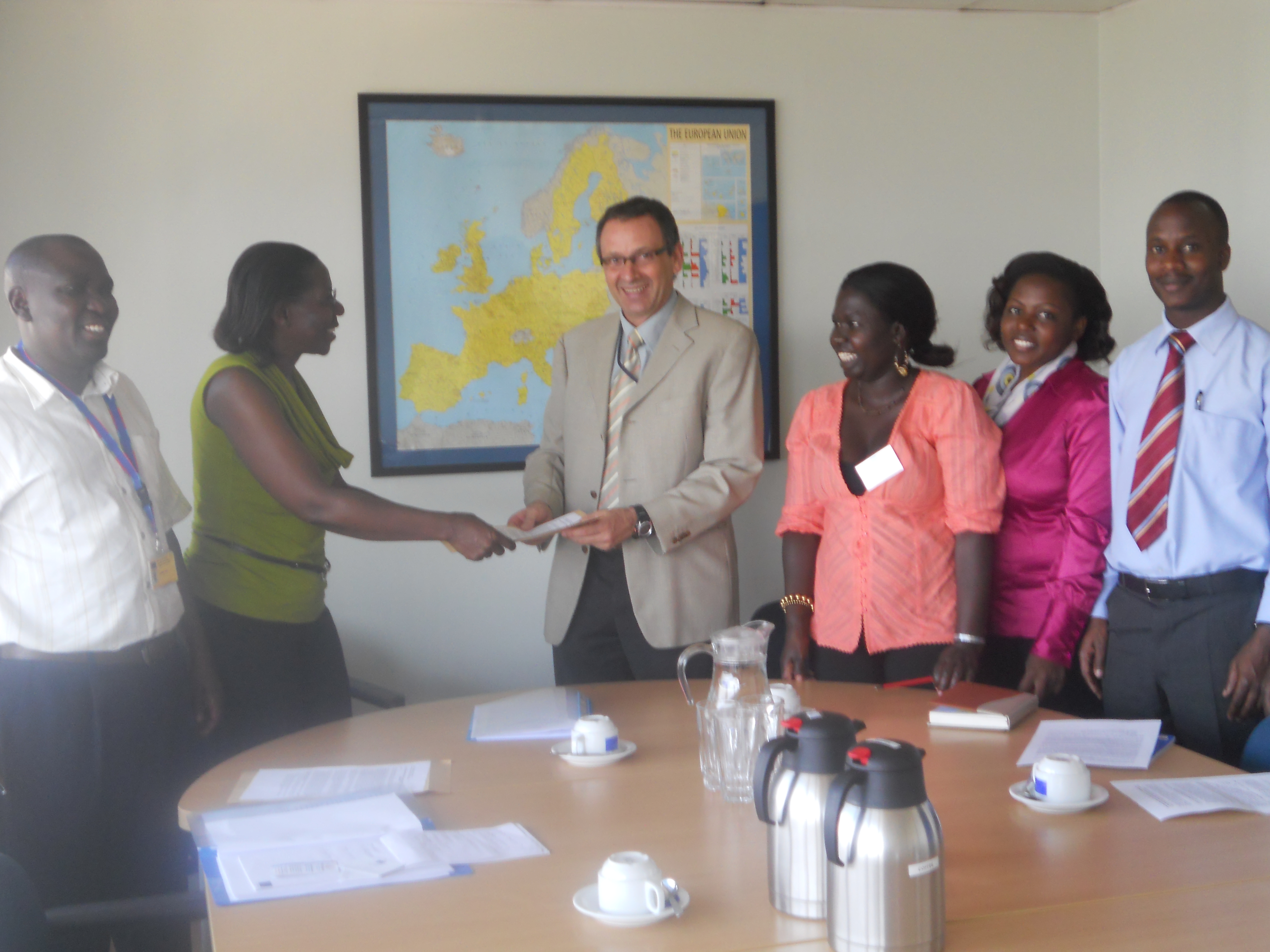 The meeting was convened to discuss concerns over the Free Trade Agreement being negotiated between India and the European Union. There has been intense activity on this FTA in the past few months and there are concerns world over on the significant pressure being placed on the Indian government to announce “trade-offs” at this Summit.

It was against this background that as a coalition working on access to medicines in Uganda, we requested for a meeting with the EU DELEGATION to Uganda to relay our concerns on the effect of this free trade agreement on the lives of many Ugandans depending on generic medicines imported from India.

The Head of Delegation had a busy schedule but were were able to meet Alex Nakajjo, the Operations Officer Trade and Regional Intergration, European Union Delegation to the Republic of Uganda and the first secretary, Mr. Jose Soler, who is the Head of Cooperation.

Discussions
Jane introduced the purpose for our meeting and also pointed out that we appreciate the good work that the EU is doing in Uganda and in developing countries as a whole. However, we had concerns over the Free Trade Agreement being negotiated between India and the European Union. That the India-EU FTA as currently drafted may have drastic consequences for the accessibility and affordability of medicines in Uganda because the EU is unyielding on the inclusion of provisions on intellectual property that exceed India’s obligations under the Agreement on Trade Related Aspects of Intellectual Property Rights (TRIPS) and that, if not corrected, will endanger access to generic medicines—in India as well as in importing countries such as Uganda, where our lives depend on access to Indian generic medicines.

We further explained that if such provisions on intellectual property are introduced in India, the ability of Indian generic companies to produce affordable medicines required not only in India but in Uganda as well would be severely compromised.

We the expressed our demands as being primarily that the EU ensures ELIMINATION OF THE FOLLOWING PROVISIONS IN THE EU-INDIA FTA:
• Investment Rules, as they enable foreign companies to take the Indian government to private courts over domestic health policies like measures to reduce prices of medicines.
• Border Measures, as they will deny medicines to patients in other developing countries with custom officials seizing generic medicines in transit.
• Injunctions, as they undermine the independence of the Indian judiciary to protect right to health of patients over the profits of drug companies.
• Other Intellectual Property Enforcement Measures, as they put third parties like treatment providers at risk of police actions and court cases.

AND DO NOT BRING BACK:
• Data Exclusivity, as it delays the registration of generic medicines and will not permit the placing of affordable versions of pediatric doses and combinations of “off-patent” medicines on the market.
• Patent Term Extension, as it will extend patent life beyond 20 years.

It was at this point that Mr. Jose informed us that the Patent term extension and Data Exclusivity had not been eliminated from the Negotiations!

EU Response (Mr. Jose Soler)
Mr. Soler explained that what the EU is trying to do is negotiate and set conditions for how the EU should relate with India. While the process is ongoing, they are doing their best to reach a conclusion that is favourable to both parties. Drugs to developing countries pass through Europe, if while they are transiting through Europe they are found to be counterfeits, substandard or infringing Patents, then they will be ceased. This applies to all products, not just medicines. This is a trade war that will bring conclusions that will bring a win win situation for both sides, i. e India and the EU.

However, it should be noted that the EU Negotiators are taking into account all of the flexibilities and specifics of what Indian law and system accommodates. The intention is not to stop the manufacture but to facilitate the agreement and provide a context in which generics can be manufactured. He re assured us that the EU will not deter production of generic medicines and as such will forward our Letter and concerns to Headquarters so that while they make decisions they are fully aware of what affects Ugandans.

CSO response to above remarks
Much as the EU has legal rights over drug patents and data exclusivity, reality shows that all trade agreements are profit oriented. What we are asking for is a balance between access rights for persons in developing countries like Uganda and commercial profit initiatives of the EU. India has been termed the pharmacy of Africa, if this trade agreement does not uphold the spirit of TRIPS by taking maximum advantage of the flexibilities detailed under the TRIPS Agreement as affirmed by the Doha Declaration and August 30th decision on Public Health, then the lives of Ugandans and many other people from Africa will be more or less traded away.

Mr. Soler Josey Responds
As an institution we also look to seeing that there is a balance between commercial interests and medicinal needs for the developing countries. We will report to the Headquarters and make sure that we convey your information to the commission in charge of these negotiations.

We will be getting back to you with elaborate details of what is taking place in these negotiations, we will attach this letter to the report of our meeting to headquarters, but since there is just a few hours to finalizing this FTA, (It is tomorrow 10th, February, 2012 in principle), please bear with the conditions if no action is actually taken concerning the demands. I assure you that this information will be provided to the Headquarters and the concerns will be taken into consideration during the Negotiations.

Further you can follow up with Alex the Operations Officer Trade and Regional Intergration, European Union Delegation to the Republic of Uganda for future updates.

Side meeting with coalition on a way forward
After meeting the delegation, members were of the view that we set on a mission to advocate for promotion of local innovation in the pharmaceutical industries, we need government to secure a policy on investing in the local pharmaceutical industries so that we can get the ability to make use of compulsory licenses. Dependence on India is not sustainable, we can’t be crying every time India is being pushed to the wall.