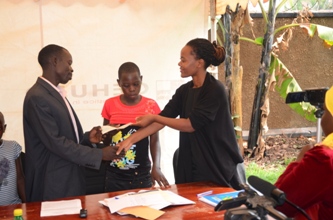 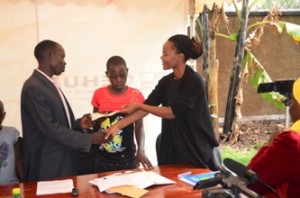 Kampala – Uganda -Today, Mr. Mugerwa David and his three children have received a cheque worth UGX 9, 400,000 from the Chief Administration Officer of Nakaseke District Local Government. This payment is partial compensation of the UGX 35,000,000 awarded to this family by the High Court of Uganda for violation of human and maternal health rights of Ms. Nanteza Irene who died in labour due to the negligent acts of employees of Nakaseke District Hospital.

In May 2012, The Center for Health, Human Rights and Development (CEHURD), Mugerwa David and his four Children dragged Nakaseke District Hospital to court over failure to provide basic Emergency obstetric Care to Ms. Nanteza Irene (Now deceased) while she was in labour at the Hospital. On the 5th of May, 2012 Nanteza was taken to Nakaseke hospital by her husband, Mugerwa David to deliver her baby. While at the hospital, a nurse detected that the deceased suffered an obstructed labour that required urgent intervention by a doctor. The doctor on duty only arrived at the hospital after over eight hours when it was already too late for any medical intervention to reverse the haemorrhage that had arisen due to a ruptured uterus. Ms. Nanteza Irene died.

On the 30th of April, 2015, Hon. Justice Benjamin Kabiito while delivering his judgment to the case concluded that Nanteza’s human and maternal health rights, right to basic medical care and the rights of her children and husband were violated. Nakaseke District Local government was found vicariously liable for the acts of the doctor and the hospital administrator who failed to ensure the provision of emergency obstetric care urgently required by Ms. Nanteza Irene. The Court then awarded general damages worth UGX 35,000,000 against Nakaseke District Local Government to Mr. Mugerwa and his children for the pain and loss of their loved one.

This case demonstrates to Ugandans that local governments can be held responsible for their inaction, or failure to protect human rights, as well as the infringements on human rights. As agents of central government, Local governments are supposed to take appropriate measures to prevent, punish, investigate, or redress harm caused by their employees that could lead to a violation of human rights as guaranteed by the 1995 constitution of Uganda.

“CEHURD applauds Nakaseke District Local Government for taking urgent steps to meet the orders issued by Court.” Notes Mr. Mulumba Moses, Executive Director of CEHURD. “We also take cognizance of the improvements in Nakaseke District Hospital after the determination of the case, we have received reports that Nakaseke district Hospital has now got a new outpatient department, two theaters, and three isolation wards and is putting in place measures to supervise health workers among others. This is good progress; NO MOTHER SHOULD DIE WHILE GIVING BIRTH.” Mulumba adds.