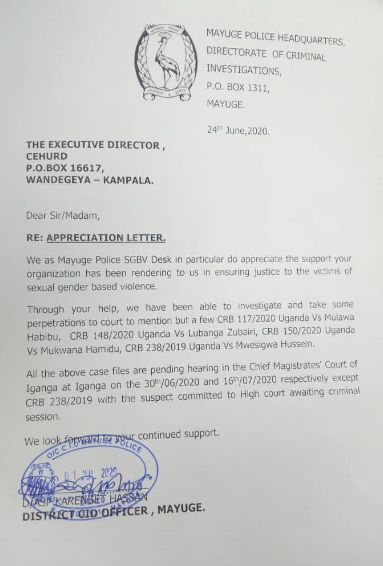 On 24th June 2020, CEHURD received a letter from Mayuge Central Police Station – Sexual Gender Based Violence (SGBV) desk, appreciating CEHURD for the support rendered to them in handling SGBV cases. This to us is confirmation that our efforts are not in vain. CEHURD has for years through it’s Community Empowerment Programme together with the Strategic Litigation Programme been engaging duty bearers and sensitizing people at the grassroots about the fight against SGBV.
CEHURD has further empowered Community Health Advocates (CHAs) at community and district level to advocate for health and human rights. They have also played a big part in providing information on Sexual and Reproductive Health (SRH) issues and human rights violations especially SGBV cases from the community.

“Cehurd has trained us CHAs on how we can work in communities on different cases mainly those concerning violation of human rights. We have undertaken different trainings with police officers which has created a bond between us and police, and has helped solve different case. I appreciate CEHURD for  empowering us” – Mesach, CHA

According to the Uganda Police Force’s Annual Crime Report, gender-based violence cases that were reported and investigated increased by 4% (from 38,651 to 40,258 cases) between 2015 and 2016. UNHCR 2019 November Monthly Protection Update on Sexual and Gender Based Violence (SGBV) indicates that 4297 SGBV incidents were managed, documented and reported between January and November 2019 in refugee settlements.
CEHURD’s drive to sensitize communities on SGBV culminates from the increasing number of these cases. The National Action Plan on Elimination of Gender Based Violence in Uganda (2016-2020) frames the issue of GBV as an urgent development priority and factor to address in achieving Uganda’s Development Goals for 2020.

“For CEHURD to be recognised and appreciated by the Mayuge Central Police Station for providing legal support to survivors of sexual and gender based violence (SGBV) is a great milestone towards ensuring that SGBV survivors access justice through the Courts of Law.” -Ms Ruth Ajalo, Lawyer at CEHURD.The write is a Communications Officer, CEHURD.

The writer is a Communications Officer at Center for Health, Human Rights and Development.