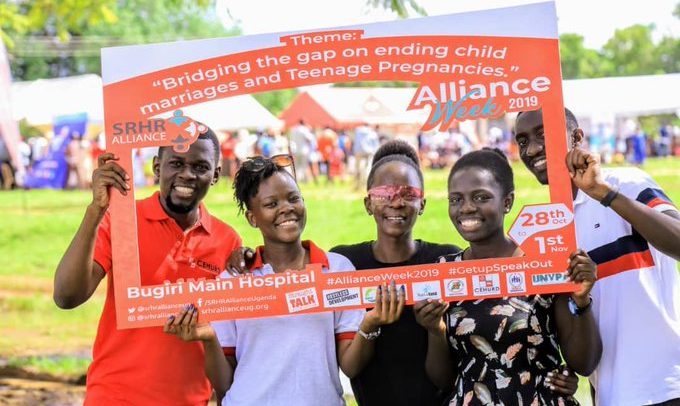 THERE IS NO WAY ANYTHING IS GOING TO BE DONE FOR THE YOUNG PEOPLE WITHOUT THEM BECAUSE IT WILL BE AGAINST THEM! (THE IMPORTANCE OF MEANINGFUL YOUTH PARTICIPATION)

I agree with World Contraception day ambassador Nana Abeulsoud when she states that today there are more young people than before and therefore youth voices matter because no one is more convincing to define the future through innovation but the largest population. It is common knowledge that Uganda has the second youngest population in the world with about 78% below 30 years and half of that below 15 years. We should also note the alarming growth rate which is 3% per annum, the unemployment rate of the youth which is 38% and the rate at which teenagers are getting pregnant has increased from 24% to 25%. It is on this premise that I focus on Adolescent girls and young women.  Adolescent girls and young women (AGYW), especially in sub-Saharan Africa, are highly vulnerable to HIV. In 2015, up to an estimated 450,000 new infections occurred among AGYW aged 15-24 years globally, translating into approximately 1,229 new infections per day.[1] In Uganda, where AGYW are estimated at 6,569,000 or 16% of the population, up to 29,640 infections occurred in 2015.[2] In 2014, HIV prevalence among young people aged 15-24 years was estimated at 3.72% for women and 2.32% for men.[3] New HIV infections among AGYW are substantially higher than among males of the same age because HIV is more commonly acquired from male sexual partners who are a few or several years older.[4] Findings from the Uganda AIDS Indicator Survey conducted by Ministry of Health revealed that 3% of adolescent girls 15-19 years live with HIV, and that prevalence doubles (7.1%) by the time they are 24 years.[5] Estimates for 2015 show that the country registered an estimated 83,000 new HIV infections, 22% of them among AGYW, among whom an average of 50 infections occurred on a daily basis.[6]

While carrying out research on integrating Legal Empowerment and Social Accountability (LESA) for Sexual Reproductive health and HIV services for Young People in Kibwa and Kireku slums, I realized that the biggest challenge these adolescent girls and young women face is lack of information. After being assured of confidentiality, some of them who had had children before 18 and had gotten infected wished they had known of contraception, what to do in case of coerced sexual activity and infection, redress mechanisms and what their rights as individuals are. INFORMATION. That’s what they basically wished they had. Most of them are brilliant with a lot of potential but have been derailed from what they could have been simply because they didn’t have this information.

I have interacted with these young people in our legal aid tents in a number of community outreaches and health and youth camps under different projects and the need cuts across. Some of the cases they report and some of the legal advice they seek is in regards to situations that would have been easily been avoided if they had the information they needed. At one of the most recent community outreaches in Mayuge district, I encountered a 21 year old girl who had had six children in six consecutive years simply because she did not know that she could say no to an early marriage as she was not coerced into it but also because she didn’t know of any family planning methods. This information should also be given to the parents of these young people as I have encountered parents that encourage some of this behavior by giving away their own children to be ‘married’ at a young age which is not right even if they have been defiled.

We therefore have to ensure that all the sexual reproductive health rights information is disseminated to the youth specifically in the hard to reach areas like the rural and slum areas but also involve them in decisions related to and for them. Also, young people need models and not critics like John Wooden said. Criticizing them for the past will not help improve the present and future situation. We should also have confidence in them and give them a chance to work with duty bearers as partners. Meaningful Youth Participation (MYP) means that young people work in all stages of decision-making and can participate on equal terms with adults at a number of levels, or alternatively work independently from adults and make decisions solely with the involvement of youth voices. MYP is a right that all young people have according to the Convention on the Rights of the Child. According to this UN Convention, young people have the fundamental right to participate and access information related to decision-making processes that affect their life and well-being. There is clear evidence that MYP benefits society, has positive effects on their development, strengthens organizational capacity and is key to achieving Sexual and Reproductive Health and Rights (SRHR) program outcomes. The youth should be encouraged to take charge of their lives by addressing their situation and then taking action in order to improve their access to resources and transform their consciousness through their beliefs, values, and attitudes. Policy and decision makers should also appreciate the benefits to the country of sufficiently investing in the young people and the risk/consequences to the country of not investing in their empowerment. Advocacy for SRHR enabling policy and social environment for adolescents and young people and empowerment of adolescents and young people to voice their rights and SRHR challenges that affect them should be intensified.

Since Adolescent girls and young women are the mostly affected as earlier illustrated, the Gender Transformative Approach (GTA) which actively strives to examine, question, and change rigid gender norms and imbalances of power as a means of achieving SRHR objectives, as well as gender equality objectives should also be applied. Male involvement and movements such as the ‘she decides’ movement which I am part of should also be encouraged so that we can have a world where every girl and woman can decide what to do with her body, her life and with her future WITHOUT QUESTION. And just Antonio Guterres (former secretary general of the United Nations) said, we need to place a special focus on young women and girls. So many futures are derailed when young women are pushed out of school, subjected to child marriage or have poor access to education and health care. When we empower Africa’s young women and girls, everyone wins.

The legal Empowerment and Social Accountability (LESA) approach will also go a long way in equipping the young people with the information they need and strengthen the capacity of Adolescent Girls and Young Women (AGYW) and their communities to demand for improved quality of SRH services for AGYW, including protection from sexual and gender-based violence (SGBV).

In a nutshell, youth voices matter because it is through that they can become fully empowered to become leaders in their own right. And for those in the struggle in the fight for the rights of the young people, there are times when you will see results in ten seconds and there are times you won’t see any for ten years. Either way, keep planting those seeds of character, eventually they will bloom.

[6] Office of the President of Uganda (2017). Presidential fast track initiative on ending AIDS as a public health problem in Uganda; a five-point plan