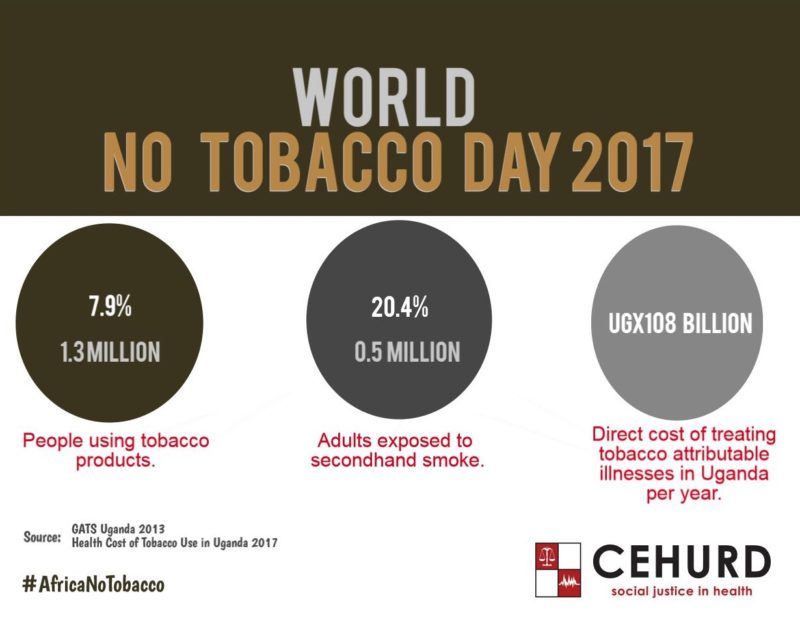 Today, as the world commemorates World No Tobacco Day 2017 under the theme Tobacco- a threat to development, Hon. Chris Balyomunsi, Hon. Dr. Aceng Jane Ruth and Prof. William Bazeyo and WHO Country Representative Dr. Abdulaei D. Jack have launched “The Health Cost of Tobacco Use in Uganda – February 2017”.

The report was compiled by Makerere University’s College of Health Sciences – School of Public Health in collaboration with the Uganda Cancer Institute, American Cancer Society, The Centre for Tobacco Control in Africa and Ministry of Health.

According to the report, 21% of the patients had a history of tobacco use (8% were currently using tobacco products and 14% had ever used tobacco). The proportion of patients who were current users or had ever used tobacco products was 32% for men and 9% for women. The total direct healthcare cost to all patients was about UGX 1.2 billion, of which the highest proportion 44% was on nursing and medical procedures and 24 % was on medicines.

At the launch, Center for Health, Human Rights and Development (CEHURD), was commended for issuing a legal opinion to the Ministry of Trade on issuing sponsorship licences to support tobacco farmers which contravenes with the law; sensitizing government ministries including; Office of the Prime Minister, Uganda National Bureau of Standards (UNBS), National Environment Management Authority (NEMA )and Ministry of Gender Labour and Social Development.

CEHURD was also applauded for the well-fought battle together with the Attorney General’s office in response to the BAT petition in court and was encouraged to take to court all institutions that will defy the Tobacco Control Law.

The launch follows the Constitutional Court in Kampala’s decision on 17th May 2017 denying an application by the British American Tobacco Limited for a temporary injunction to stay the implementation of some provisions of the Tobacco Control Act. The court stated that it found that the Applicants (BAT) did not make a case to warrant the grant of a temporary injunction.

Introduced by the World Health Organization (WHO), The World No Tobacco Day is intended to promote awareness of the environmental effects and health complications resultant from chewing or smoking tobacco.

Let’s all join the fight against tobacco use because a tobacco-free Uganda is everyone’s responsibility.